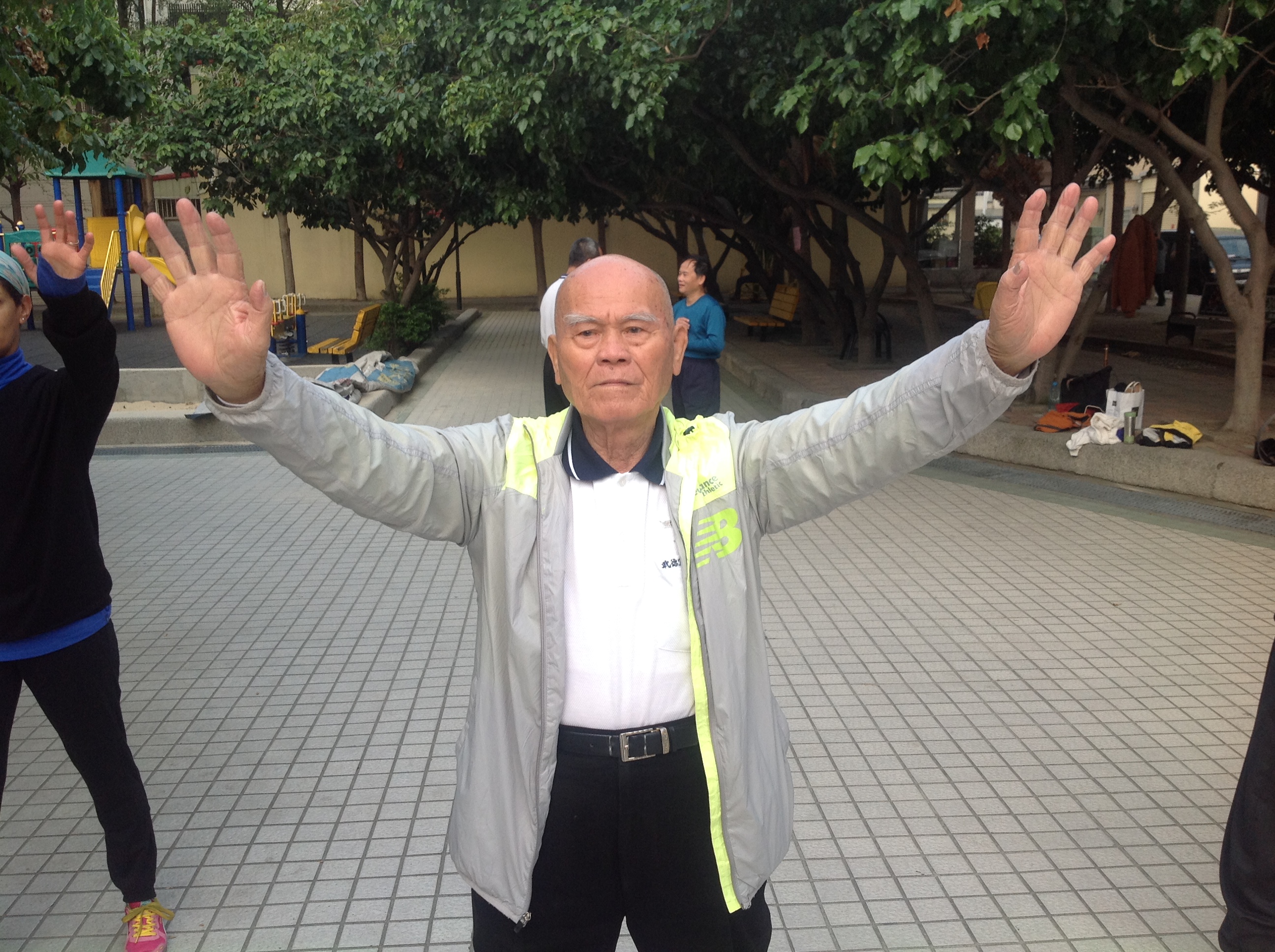 Some time ago, a friend sent me a link on a Taiwanese YouTube channel of an elderly gentleman performing White Crane Boxing and push hands. He was practising with a group of locals in a park; on close observation, he seemed incredibly soft yet powerful, and was effortlessly moving people who were much bigger and heavier. I rewound the video clip and watched closely a few times, then called my wife to listen to his instruction to see if she could understand him. My wife, a native Taiwanese, confirmed my thoughts: he was speaking a local dialect. She was amazed at his performance and commented that his instruction was incredible. We were already planning a visit to Taiwan, so we searched through the video clips until we found a phone number on a park sign in the background. We rang this number: the park manager knew immediately who we were talking about. Upon explaining who we were, the park manager promptly gave us the gentleman’s name and contact details. We discovered that this man was Master Tseng Jin Ying, a humble and friendly man, who agreed to meet and train us in White Crane Boxing. That became the first visit of three over the past few years, through which we strengthened our friendship – and gained much wisdom from an incredible and genuine master.

The Significance of the White Crane

Before I venture into the teachings of Master Tseng, a little background information should be offered. The crane symbolizes longevity, luck and happiness. It has been admired by east Asians for thousands of years and features heavily in literature and paintings – including paintings of Taoist Immortals following the guidance of cranes, or even riding a crane towards the heavens. The crane rests on one leg and sleeps with its head in its anus – purportedly to cycle its energy. This is believed to be the reason for its longevity.

Apart from being a symbol of long life, the crane also represents romantic union and loyalty. As testimony to this, the rare red-crowned crane has only one partner throughout life; even if the partner is infertile, he or she will stay.

The Taoist Immortal, He Xian Gu, riding on a red-crowned crane.

The Legend of White Crane Boxing

The founder of White Crane Boxing (or White Crane Kung Fu) was a young woman named Feng Qiang Liang. She lived in Fujian Province, Southern China, sometime in the Qin Dynasty. Passionate about the martial arts, she came from a family rich in its practice; her father studied at the Nine Lotus Mountains Shaolin Temple.

There are numerous legends as to how Ms. Feng developed or learnt White Crane Boxing. The most credible story is that whilst planting seeds, a large crane was menacing her. In an attempt to scare the bird, she took many swipes at it with her stick, and was amazed at how the large bird – by swooping, ducking, hopping and flapping – was able to avoid her strikes. Another popular legend is that Ms. Feng dreamed of a white crane that transformed into a human, and demonstrated movements that could be used for combat. She noted how it used its wings and body in a connected and flexible – yet powerful – manner, and became intrigued by how magnificent it was.

As daily practice, Ms. Feng mimicked the natural behaviour of the white crane when moving and hunting food. She observed its alertness in protecting itself against predators, and agility when being threatened. From observing and copying the movements of the white crane, Ms. Feng developed a unique array of graceful martial principles, incorporating short, sharp techniques, pecking, springing, “flying” and the like.

After some time of practising her new martial art, she was confident – and eager to trial her techniques in real combat. Since this was a rich period in Chinese martial arts, Ms. Feng displayed posters challenging all comers to open combat. Many curious fighters came from far and wide to take up her courageous challenge. Astonishingly, she was undefeated – and the fame of White Crane Boxing spread quickly throughout China. After many generations of dedicated practitioners, White Crane Boxing eventually reached Master Tseng.

Master Tseng Jin Ying of Taiwan is a robust 85 years young; in fact, he is the most amazing 85 year-old I have ever seen. He began training in White Crane Boxing at the age of sixteen, and began teaching at the age of 24. He has taught in this same neighbourhood park, free of charge, for over 60 years.

Master Tseng has always been passionate about his practice. As a young man, he worked as a farmer in the rice paddies and, much to the dismay of his boss, would practice his forms during his breaks. His boss would relay to his father: “I think your son is a little strange”. He often received scolding from his mother for practising in the yard on summer evenings in his underpants.

Undeterred, Master Tseng practised daily and out of the hundreds of students of his own Master, Lai Jian-Shan, he remains the last disciple. “I was not a natural athlete but because I persisted, I was able to master the teachings and now I enjoy wonderful health,” says Master Tseng.

A real anomaly of our times, Master Tseng never learnt to read or write, never drank or smoked, nor did he possess a driver’s licence. He has been a vegetarian for the past 30 years and only eats at home. He has nine children and 40 grandchildren.

In teaching White Crane Boxing, Master Tseng reveals that the head is a “wise man” (the place of judgement), the body is “the emperor” (home of the head), legs are “the general” and hands are “the soldiers”. He says, “The emperor employs a sage to advise, a general to lead and soldiers to fight. The eyes are important for judgement, that’s why you never look down; it is essential to look at your opponent’s nose to gauge their spirit and project your own.” Regarding one’s development in training, Master Tseng says, “When beginning the study of White Crane Boxing, you bear a resemblance to a baby crane breaking through its shell, feeling clumsy and awkward. The intermediate stage is comparable to your parents teaching you to hunt for food and become more independent. This is the stage where you begin to activate the sophisticated White Crane principles. When you have reached the advanced stage, you have embodied the principles, requiring no further tuition. You begin to pass the tradition onto others. These three stages of development may take decades.”

“The blue firmament is extremely big and round,

Chi is its beam,

And it is Chi that rotates it.”

Master Tseng describes the feeling of fighting against a White Crane boxer as throwing a hard rock against a blanket: the force and weight of the rock is absorbed and inconsequential. The arms of a White Crane boxer are like the wings of a crane: soft and flexible with extensive power, creating flapping and coiling energy. To highlight the importance of flexibility, Master Tseng quotes, “If you strike an arm or a leg with a rigid stick, it may snap, but if you use a flexible cane, it will penetrate deep without breaking.”

Interestingly enough, cranes fly with their necks outstretched, demonstrating the power of extension. Cranes also boast deadly accuracy: for fear of damaging its beak, a crane only strikes soft targets like the neck or eyes – and once its neck is extended, it selects several targets before retracting. This is also the natural behaviour of a crane when searching for food. Likewise, White Crane Boxing techniques always involve extension. Master Tseng teaches that one’s arms should extend like the wings of a crane, since the power generated by extension requires little effort. For instance, if one wants to swing a stick, one’s arms must be free and extended, not close to the body. Furthermore, a White Crane boxer uses a variety of hip rotations and complex wave motions of the spine. White Crane defences employ “sticking” energy to control and confine the opponent’s actions – much like a crane smothering prey with its wings. And just as a crane springs from its haunches to take flight, lifting leverage and springing power comes from the knees and extends through the body to the fingers.

Master Tseng points out that the white crane is a large bird with subtle and quiet mannerisms – unlike a bear for example, that growls. Original White Crane Boxing belongs to the internal systems of Chinese martial arts, with the emphasis on building power from the inside. Thus, one must maintain stillness within the body. Furthermore, inner quietness invites the Shen (spirit) and Yi (intention) to unite with Qi (intrinsic energy) to facilitate physical movement. “Deep water of the ocean is dark and still,” says Master Tseng. “When your body is relaxed and quiet, Qi will sink deep. Your movements must be smooth and even.”

According to Master Tseng, the healthiest time of day to practise is between 5am and 7am, when one’s immediate world changes from Yin to Yang (night to day) and the air is optimal. (This period of time corresponds to the Large Intestine Meridian of the Chinese Clock). It is even more beneficial to practise close to trees, he says, as they emit Qi which forms new leaves, releasing oxygen. Conversely, one should not train close to trees in the evening as they release waste energy and the air becomes damp.

If one is relaxed, breathing should follow the natural movements of the body. Training will be natural and one will not tire easily. Regarding sounds made during breathing, Master Tseng believes that they are only to serve as a reminder that one is breathing naturally, and thus, is unnecessary.

Master Tseng stipulates that the ego is one’s worst enemy in martial arts – it creates tension and impedes development. He tells a story of a famous teacher who, at only 50 years old, has a shattered body and walks with a bad limp – the result of many fighting competitions. Although he won many of these fights, this teacher has not won in the long run. Master Tseng quips, “Bruce Lee was becoming great but even he began to use unnatural methods to enhance his power and it probably contributed to his downfall.”

Unlike other kung fu styles, there are no auxiliary tools or weapons in White Crane Boxing. “Weapons are for show, to make a spectacle,” Master Tseng says. “I don’t study weapons. If you do, I suggest you start with a small weapon and build to larger one. Weapons are dangerous; if you kill someone, you must pay for the funeral!” he laughs.

Whenever I offer to pay for his instruction, Master Tseng becomes a little agitated. “It is very expensive for you to fly from Australia and pay for a hotel,” he lectures me. “If I charge you for instruction in addition, it will be prohibitive for you to come to see me. At my age, I am more concerned about the proliferation of original White Crane Boxing than money.”

In 2018, Master Tseng will be teaching a small group of foreigners for the first time. I will be hosting the “Mystical Tawian” training tour with my wife, Shou Mei; the highlight will be two days of intensive training with Master Tseng. I will also be taking a television film crew to create a documentary of this extraordinary martial artist for the world to see.

This article was featured in Blitz Magazine, Aug-Sept 2017 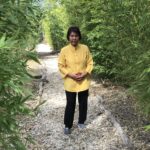 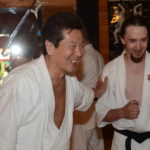